GAFX 2019 packed a mix of well-curated and effective sessions by distinguished professionals and chieftains of AVGC sector. While Makuta co-founder and VFX veteran Pete Draper illustrated the importance of visual effects in today’s world with an enlightening session, it also served as an extension of his previous address.

Grand Ballroom played host to a much-needed panel on the need for gender equality in creative arts. Payal Dani from Mill Film, Anugraha Pearly from Sun Network, Priya Krisnan from IMAX and Anika Negi from Technicolor Games graced the panel with elaborate inputs and insights about the progress women have made over the years.

The session was followed by Firefly Studio owner and VFX veteran Sanath PC who spoke extensively about how VFX technicians were not even mentioned in credits to the current times where they have come to become an integral part of pre-production, the shooting process and Post-production.

With thunderous applause and adulation, attendees of the session intently listened as Sanath delineated the operations of VFX team as to how they bring about magic and the various applications of visual effects in cinema with a step-by-step and elucidated presentation.

Redchillies.vfx VFX supervisor Ronak Sanghadia conducted a session where he shared the intricacies of how they shrank Shah Rukh Khan in the movie Zero.

Expanding upon the breakdown as to the techniques employed to depict the dwarfism, Sanghadia shared, “Having been in the industry for over 25 years, everyone recognizes SRK’s mannerism and behaviour. Thus, we decided to shoot every scene with SRK though, we had a body double, strictly for reference. We had 1600 artists working on this movie, 600 being only from our studio.  To ensure this isn’t the case, we shot five plates for each shot. That was a big challenge so in a day, we could only shoot six-seven shots. The character as per the director had to look cute, which was the main challenge for post-production. Keeping the demeanour and characteristic and yet, shrinking SRK’ character proportionately.

(Oscar-winning VFX studio) Double Negative VFX supervisor Jaykar Arudra discussed how they created one of the most challenging and iconic images in the movie Venom. Sharing insights about the process, he expounded, “We were told that we have to be ready to use a lot of goo effects. Released in October 2018, Venom had a count of approximately 1000 shots to be delivered between London, Montreal, Vancouver and Mumbai along with Chennai. So when the film came to us, the first question was how to work around with the look of Venom, Venom as a character is inspired by a Gorilla. India itself was responsible for delivering approximately 200 shots. It has to look very human and organic. Expressions had to be animated with the help of the link between mouth, teeth and eyes. So the anatomy of a human being had to be incorporated to make it more relatable and emotive.”

In acknowledgement of the leaps and strides made by the Kannada cinema, GAFX day three saw a session dedicated to the veterans of the industry ranging from film producers to cinematographers. 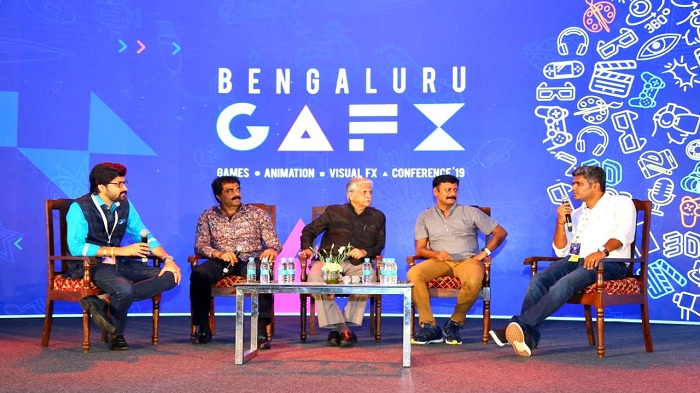 As a part of Bengaluru GAFX 2019, Asia’s largest event on animation, VFX and Games, the exclusive panel session was titled: Changing Landscape of Sandalwood – A Technology Perspective. This session threw light on the journey of Kannada Films from a technology perspective from the standpoint of a leading producer, director, choreographer & visual effects supervisor. The first look poster of the first ever 100 crores VFX loaded Kannada film Gandugali Madakari Nayaka produced by Rockline Venkatesh and directed by Rajendra Singh Babu was shown to the audience present and was discussed.

The elated audience left the hall for a short break only to return to witness the most anticipated part. Time had come to acknowledge the talent present in Bengaluru. Before the award ceremony could take place, the audience was treated to a spectacular line-up of a diverse set of dance performances that engaged the audience. Runners up and finalists were featured on the screen as the host unveiled a grand plethora of artwork from the budding artists. And now, it was time to award the best!

ABAI president Biren Ghose commenced the valedictory award function saying, “ABAI is delighted to present a varied number of opportunities to students, professionals and any small and large industry,”

With an enthralling rendition of a Beatles’ song stylised in summation of the event, ABAI president  Biren Ghose had the audience spellbound with his music. In a heartening address, Ghose announced a lifetime achievement award to the Animation veteran Ram Mohan who could not be present at the GAFX conference owing to health issues.

As we spoke to some students about the Bengaluru GAFX 2019, they exalted in unison saying, “We can’t wait for the next edition.” Recognising the artistry and hard work that went into the success of the three-day event, ABAI vice president Ganesh Papanna extended his great gratitude to all and GAFX closed its curtains for 2019, poised to be even grander in 2020!